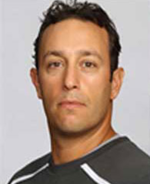 Michael Mordocco became the new Head Men’s Soccer Coach of the LIU Post Pioneers in the Spring of 2018. Previously, Mordocco held the position of Associate Head Coach at the University of Massachusetts for three seasons. During his time with the Minutemen, he was a part of a staff that earned 2017 Atlantic-10 Coaches of the Year, while also leading UMass to a conference title and NCAA Tournament appearance. Mordocco also spent four seasons at UConn, helping his alma mater capture their 13th regular season conference title. In addition to his roles at UMass and UConn, Mordocco brings several years of collegiate experience as an assistant at Division I Stony Brook University and SUNY Oneonta.